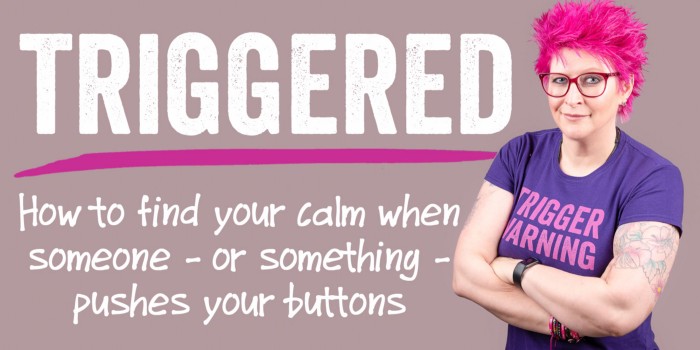 We’ve all been there. Someone — or something — really punches us in the feels and, before we know it, we’re spiralling into an emotional black hole.

Being ‘triggered’ can bring about all kinds of unhelpful thoughts and feelings; we’re not good enough, we did something wrong, everybody hates us — all the usual headlines we might file under ‘Imposter Syndrome’ — as well as rising anger, frustration, despair and tears.

It’s not pleasant… and that is, perhaps, one of the biggest understatements I’ve ever written!

Something I’ve learned is that blaming the ‘trigger’ doesn’t work. Depending on our personal circumstances and lived experiences, all kinds of seemingly innocuous happenings can tip us over the edge and it’s nigh on impossible to eliminate them all, OR label them as the cause of our discomfort.

I don’t subscribe to the idea that we should stick warning labels on everything, avoid talking about sensitive topics or coat ourselves in bubble wrap. I don’t believe in expecting others to sensor themselves, just in case.

The imbalance lies INSIDE of us and so, like so many issues that revolve around our mindset and emotional state, the solution is an inside job.

The imbalance lies INSIDE of us and so, like so many issues that revolve around our mindset and emotional state, the solution is an inside job.

The kind of triggers I’m going to be addressing today are those revolving around value sets; I’m not about to touch issues such as deep trauma or complex PTSD — they’re for someone else with a far more specific skillset.

What do value sets have to do with triggers? For many, many people, absolutely everything!

Let me walk you through a ‘trigger’ scenario I found myself in this week, and show you how I managed to break my state, learn from it, let it go (with love) and move on.

You ready? Here we go:

I was minding my own business, sitting in my garden, lazily scrolling Instagram, when their face appeared.

It wasn’t the first time but, this week, they’d been appearing more and more and, something about the relaxed vibe of my early evening chill time meant the impact was fiercer.

How DARE this person invade MY Instagram?! The gaul of it!

Old hurts, confusion, frustration, came flooding back, hitting me in the gut and spreading with the pervasive creep of an ink blot on wet tissue.

Old hurts, confusion, frustration, came flooding back, hitting me in the gut and spreading with the pervasive creep of an ink blot on wet tissue.

This was someone who’d been so keen to get coaching with me, so desperate to build their business and confidence, get their brand on track, that I’d bent over backwards to help.

It was towards the end of lockdown and they’d been referred by a friend. The universe conspired, we found ourselves at the same event and, I found myself juggling my diary and creating a space for our first session when, for anyone else, there’d have been an eight-to-12-week waiting list.

They seemed kind, likeable, passionate about their mission, keen to make a positive difference in the world and the kind of person I’d be happy to support.

Our first session came and went; there’d been a bit of confusion over timings, but we worked it out and all was well.

Then came the messy part…

After two sessions of a coaching agreement with a minimum term of six months, they started wanting to reschedule.

Now, life does sometimes get in the way, so that’s all good, but when it keeps happening, something’s usually afoot.

This person was — is — a shining light in their community, and I’d already amended my working hours to accommodate coaching while they were overseas, and in a different time zone, to serve their people.

Once we were working to their new time zone, they needed to change their appointment, due to a bout of food poisoning. Okay, it happens; honestly, at that point, I was more concerned than anything and hoping they were okay.

The rescheduled date arrived and, half an our before our appointment, they messaged to say they were in hospital — possible fractures and concussion after an accident.

Oh no! Again, my heart went out to them. Genuinely concerned, I sent my best wishes and asked them to let me know how they were doing.

As requested, I sent more dates.

I started to worry. What could have happened? Were they okay? Were they still overseas? Did they manage to get home? Had their health deteriorated, or worse?

I was genuinely concerned. A month of messages later, and still no response.

And then, I saw them popping up on Instagram. Apparently, not a care in the world.

I tried messaging there. Still nothing.

Not only that, but I could see my messages weren’t being seen on WhatsApp, so either read receipts had been turned off, or I was simply being ignored.

You can only give someone the benefit of the doubt for so long before your faith in them doing the right thing becomes delusional.

Uncomfortable reality check: even if there was some kind of tech glitch preventing them from seeing my messages on ANY platform, there is still no excuse for breaking a contract, not conveying a change of heart/need, and ignoring someone who has only ever been on your side and in your corner. You can only give someone the benefit of the doubt for so long before your faith in them doing the right thing becomes delusional.

Between November and May I’d kept the faith, hoping they were okay, genuinely worried for them. My last message, dated May 3, 2022, at 7.45pm, read: “I’m hoping you’re well, since the last time you spoke to me you were in hospital. Are you okay now? x”

This pillar of the community had taken the incredibly mature and conscientious decision to break contact — and contract — and ghost me.

Ghosting. Really. What are we? Teenagers?

I checked in with the friend who’d done the referring. He’d been similarly ghosted.

At first, it rankled. I felt used, ignored, taken for granted and a whole heap of foolish for believing in someone, wanting to help and support someone, who clearly thought so little of me.

I thought I’d let it go but, only this week, when their smiling face kept popping up in my Instagram stories, I felt that familiar punch in the gut.

I’m a busy lady. My books are full. I’m running a successful business, helping others and doing my level best to serve and make a positive difference every day, so why was I letting a single person get under my skin so much?

I’m a busy lady. My books are full. I’m running a successful business, helping others and doing my level best to serve and make a positive difference every day, so why was I letting a single person get under my skin so much?

I paused, took a breath, and looked at what was going on beneath those initial, knee jerk emotional reactions.

This came down to value sets.

Integrity is one of my core values — it runs through me like UK holiday resort names run through a stick of rock.

Ghosting someone, for me, is outside of integrity.

Bingo! That’s it! Clearly, this person and I have very different value sets and, whilst I’m showing up completely in alignment with my truth, they, perhaps, are not.

Once I’d realised this, worked out what the sticking point was, I was able to smile, release that breath I’d been holding, and let it all go with love.

I didn’t need to keep worrying. I didn’t need to fill in the gaps, or create stories in my head. I just needed to accept that, sometimes, other people work to a different rule book.

The ghosting wasn’t about me — it was all about the other party’s value sets, and they were not aligned to my own.

That’s the thing about values; they run so deeply, so power-fully, we expect everyone to be singing from the same song book. When it turns out we’re not all on the same page, that can really rattle our cages.

Next time you feel yourself being triggered, I invite you to follow the same, simple steps:

Note: ‘They were rude” might be accurate, but that’s not the base cause of your reaction. What is it, inside you, that caused you to react to the behaviour you perceived as rude? Some people *are* rude. So what? Why does that rattle you so much?

This is where it might be to do with your value sets. If it is, you can choose to recognise that, let it go and move on, AND decide that you don’t need to be so bothered by similar behaviours in future.

Remember, you cannot control external ‘triggers’, but the way in which you respond to them is entirely within your control.

Remember, you cannot control external ‘triggers’, but the way in which you respond to them is entirely within your control.

3. Do the work. What did you learn? What’s needed? What do you need to work on, or action, within yourself, to avoid being triggered so badly in future?

If you can do this, you’ve pretty much nailed it. Stop blaming. Take ownership. Adjust course accordingly. Learn and move on.

I hope this has helped. The world can be a minefield, filled with all kinds of twists, turns and curve balls. How we react to the unexpected is, largely, up to us.

Taz Thornton is the creator of Awesome Sauce — a free, weekly positive life and business round-up, with good news stories, positivity tips and visibility hacks for your brand. In a few minutes each week, you get a dose of optimism and some awesome advice to get seen and stay happy.

For those on a budget, Taz is also behind #UNLEASHED — an affordable confidence, content and cashflow building programme for coaches, healers and therapists.